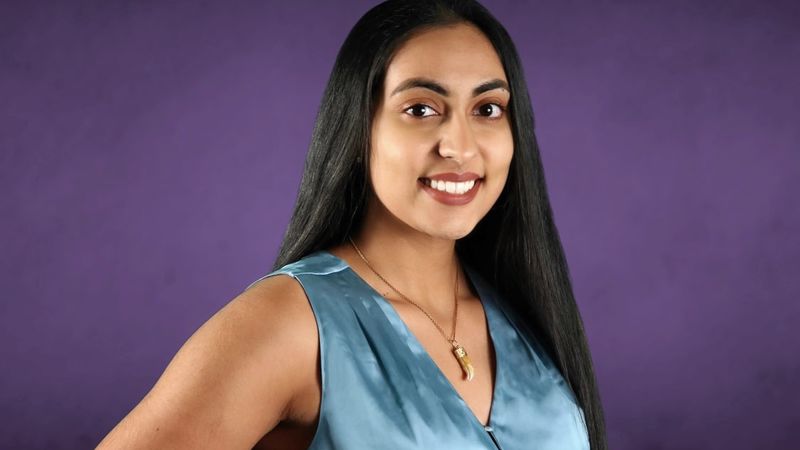 Penn State Scranton graduate Shanie Mohamed is an economic development specialist with the Wilkes-Barre Chamber of Commerce, where she’s involved in designing and developing a number of unique projects.
By: Josh McAuliffe

If you told Shanie Mohamed a mere seven months ago that she would be leading a high-profile pilot project for one of the region’s preeminent economic development organizations, she’d have said you were crazy.

Sometimes, though, life has terrific surprises in store.

There, she’s involved in designing and developing a number of unique projects, including the major initiatives Coding the Coal Region, Reimagining Our Workforce and Connect Further, as well as sub-programs like Spotlight, Pitch, Honor, Intern and The 101.

Meanwhile, she’s also collaborating with the executive director of the America250PA Initiative on programs to enhance the celebration of America's 250th Anniversary in July 2026.

“I really enjoy the work that I do here,” she continued. “Especially as we go through this pandemic, I am reminded how helpful we can be to the people and businesses in our local community. Being so connected to that community is a great feeling – we’re all supportive of each other and we all just want to see our region thrive. It’s amazing to know that I can now play a role in bringing that value as well.”

Mohamed’s path to the Chamber started last fall during her internship at Wilkes-Barre marketing agency Coal Creative. Coal Creative's CEO, Holly Pilcavage, recommended Mohamed apply to be on Wilkes-Barre Connect’s Student Design Team, which would collaborate with the Connect staff to develop four initiatives that would be launched at the organization’s November 2019 conference.

Mohamed was one of six students picked for the team. It provided significant creativity and input to the project, which was done in partnership with MIT, Microsoft, Frugal Athlete and America250PA.

The conference was a success, and as Mohamed was wrapping up her internship and studies in December, Wilkes-Barre Connect advertised its new economic development specialist position. Its job duties included efforts to further develop, finalize and execute the programs that she helped implement while on the Design Team.

After a few rounds of interviews, she was thrilled to be offered the position.

Already, Mohamed has launched her first pilot program, NEPA Works, a 12-month initiative aimed at enhancing the connectivity of the region’s current workforce, addressing skills gaps and putting displaced workers back to work. The program includes two components -- Reimagining Our Workforce and Coding the Coal Region, which was one of the programs Mohamed worked on with the Design Team.

“Talk about full-circle, right?” Mohamed said. “I spent a lot of time throughout my school years buried in the idea that, as a young professional, my ideas and contributions at a beginner’s stage weren’t as valuable as those of an experienced professional. But, the realization that some of the ideas for this pilot program were developed in a room of six college students shows that some of the greatest ideas can come from young minds. I am fortunate to have a great team in my corner, comprised of both young professionals and experienced industry leaders, collaborating with me on those ideas and bringing that innovation and impact to NEPA.”

Wilkes-Barre Connect Executive Director Joseph Boylan said Mohamed has been a great fit for the organization.

"It was apparent right from the beginning the level of talent Shanie possessed,” Boylan said. “Her problem-solving skillset highlights her creative and innovative thought process, showcasing a visionary trait most often found in seasoned veterans. Within the first three months, Shanie was picked to lead a federally funded pilot program -- a true testament to her talent and leadership qualities. More importantly, Shanie's character and personality allowed her to mesh instantaneously with the team. She has been such a welcomed addition to the team, and a key component of our vision to create impact across the Commonwealth."

Mohamed’s early professional success comes as no surprise to Chancellor Marwan Wafa, Ph.D., who Mohamed worked for while a student on campus.

“When Shanie worked for me, she was highly disciplined and motivated. When you give her something to do, she gets it done,” Wafa said. “She takes pride in her work, and whatever she does, she doesn’t just want it to be satisfactory, but exemplary. Her demeanor, openness and straightforwardness are also very admirable.”

Initially, she chose the campus for several reasons – it was close to home, it would provide her with the flexibility she’d need to continue helping to run her family’s business, and it was small enough that she could foster meaningful relationships with her professors and fellow students.

And, of course, there was the Penn State brand itself.

“The name ‘Penn State’ is beyond valuable, and I knew I would be getting a solid education from this institution no matter what part of the state I was in,” Mohamed said.

Mohamed decided to pursue her bachelor’s degree in business, with concentrations in management and marketing, and was excited to see that internships were a graduation requirement.

Right away, she found the faculty to be incredibly supportive, and cherished the small class sizes, which allowed her to ask questions and engage in illuminating conversations about concepts requiring further explanation.

Several faculty members became mentors of sorts to Mohamed, including Lecturer in Communication Arts and Sciences James Hart, Assistant Teaching Professor in English Paul Perrone, and Lecturer in Business and Economics Frank Sorokach, MBA, who supervised two of her research projects, including one that was accepted for presentation at the Eastern Regional Undergraduate Research Symposium.

“What was significant about those professors was their approach to teaching,” said Mohamed, who graduated with a 3.99 GPA. “Every time I would step into their classrooms, I knew I was not only stepping into an exciting environment, but also a place where I expected to learn important lessons both in and out of academia. Going after opportunities, networking, doing research, learning how to interview and speak publicly, self-reflecting and analyzing – these are all things they taught me, collectively. Some of those things just can’t be taught from a textbook.”

“Penn State Scranton really resonates well with people that are willing to get involved,” she said. “Joining clubs and organizations such as THON and Campus Activities Board (CAB) are great ways to meet people and find groups of friends outside of the classroom. Of course, the faculty and staff are very welcoming and involved in your progress throughout college, but I also think a lot of the ‘Welcoming Campus’ feeling really comes with the involvement and effort you put in when you’re there. There’s a group for everybody, and even if you don’t see it, there is a whole team of staff and student leaders ready to help bring you toward your interests.”

The campus also provided Mohamed with her first internship experience in the spring of 2019, when she worked in the Scranton LaunchBox business pre-incubator. There, she helped budding entrepreneurs find the needed resources to develop their business ideas, managed customer intake, and tracked client progress and development. In addition, she conducted research on solopreneurism and its ties to pre-incubator resources and services.

Although the internship was unpaid, Mohamed had the foresight to see the value in it, said Sorokach, who helps run the LaunchBox and described his former student as “very driven, engaged and energetic.”

“Shanie was a student that you knew would be dependable and get important tasks completed. It was not uncommon for her to go the extra mile to help out with the Business Club or prepare a research poster to enter into the annual Research Fair,” Sorokach said. “She did these things because she recognized that while adding extra work to her already busy schedule, these activities would make her a stronger student. … Shanie is an example for other students because she always goes beyond the mark that is set as the standard. Students often do not realize that it is the extra effort that leads to opportunities.”

“I strongly believe that my internships were vital to my preparation for the professional world,” Mohamed said. “My coursework provided me with the overarching concepts and foundation of my education, but my internships provided me with the real-world experience I needed to bridge the gap between what I learned in the classroom and the value I added in the workforce. The combination of academia, student involvement and outside opportunities left me well-prepared to take on this role.”

Looking forward, Mohamed sees herself pursuing leadership and managerial opportunities that encompass both organization and creativity, and indulge her passion for social innovation.

“Finding problems, building and testing solutions, creating impact – with whatever entrepreneurial endeavor I take on later in life, I know that creating that positive impact is a foundation I want to replicate in my work and share with NEPA,” said Mohamed, who also intends to pursue her graduate degree.

Wherever her journey ultimately takes her, Mohamed will be forever grateful that it all began at the Scranton campus.

“As someone who has taken advantage of the many resources and opportunities offered to students at Penn State Scranton, I can say that I am very happy with my college experience,” she said. “I plan to stay in contact with the incredible faculty and staff I’ve had the pleasure of knowing, and would love to stay involved as an alumna.”