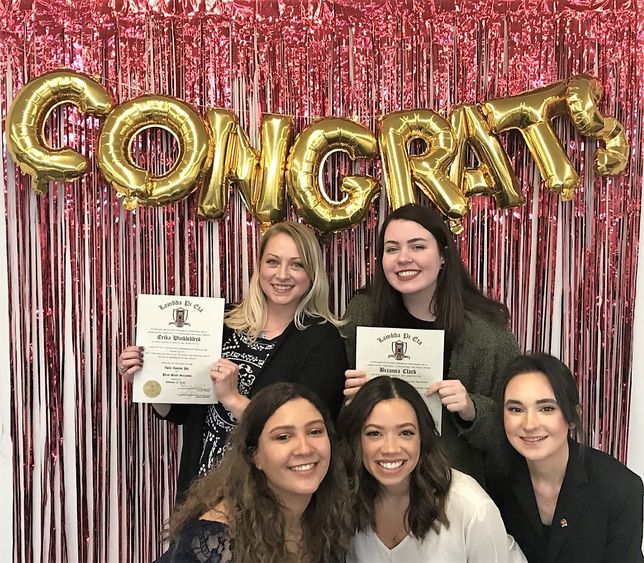 Chapter officers Lucines Polanco, president; Emma Ross, vice president; and Dominique Jordan, public relations officer, presided over the ceremony. All three were inducted into the chapter during the fall semester.

Following some remarks on the history and mission of Lambda Pi Eta, Polanco presented Clark and Winklebleck with their official membership certificates.

Winklebleck said she was extremely proud to be joining her fellow corporate communication majors in the chapter.

“As an adult student at Penn State Scranton, I didn’t think becoming a member of a Greek honor society was feasible. Now, here I am joining this amazing group of nationally recognized communication majors,” she said. “I am so thankful for the hard work that all the professors, such as Dr. Flanders, did to make this happen at our campus. I worked hard over these past few years, and I am proud to be able to show others, including my young daughter, that if you work hard towards your goals anything is attainable.”

To qualify for Lambda Pi Eta membership undergraduate students must have an interest in the field of communication in addition to achieving a high level of academic excellence.

Eligible members must be enrolled students in good standing who have completed 60 hours of undergraduate credit courses, with at least 12 of those hours in communication courses. Also, they must have a cumulative GPA of 3.0 or higher, at least a 3.25 GPA in their communication courses, and be in the upper 35% of their graduating class.

Lambda Pi Eta was initiated by communication students at the University of Arkansas, where it was endorsed in 1985 by the faculty and founder Stephen A. Smith. It became part of the National Communication Association in 1988 and has been its official honor society since July 1995.

In February 1996, Lambda Pi Eta was inducted into the Association of College Honor Societies. Currently, there are more than 500 active chapters nationwide.