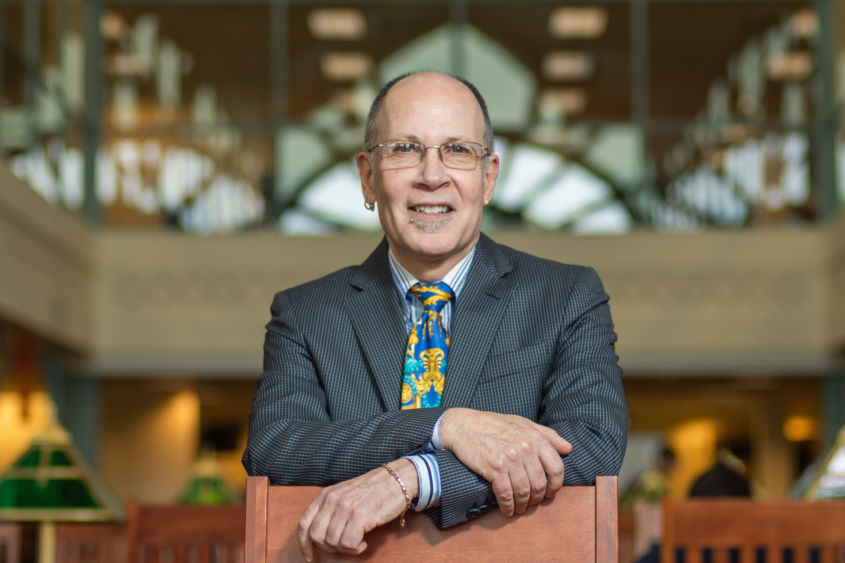 Penn State Laureate John Champagne, professor of English and chair of the Global Languages and Cultures program at Penn State Erie, The Behrend College, will speak at Penn State Scranton on Thursday, Sept. 27.

The 2018-19 Penn State University Laureate, John Champagne, will speak at Penn State Scranton during a presentation that is free and open to the public on Thursday, Sept. 27. The name of the presentation is:  “Art & Politics – The Case of Corrado Cagli.”

Champagne, professor of English and chair of the Global Languages and Cultures program at Penn State Erie, The Behrend College, is touring Pennsylvania to ask probing questions about — and offer a historical perspective on — the role of the artist in times of political turmoil.

“I will be presenting a multidisciplinary program on periods in western history when artists sought to foster social, economic and political change, and political leaders employed art as propaganda,” he said. “I’ll be discussing many art forms — plays, paintings, operas, frescoes, sculpture — and artists from across the political spectrum, exploring such questions as why and how artists intervened in politics, what forms these interventions took, how political leaders responded, and what this suggests to us about the role of art in the world today.”

Champagne is particularly interested in engaging his audiences in a discussion of the role they think art should play in contemporary United States politics.

“I want people to have a clearer historical sense of the often vexed and contradictory relationship between art and politics,” he said. “I want to scrutinize our basic assumptions of ‘the political’ in light of the perceived failure of party politics and an acknowledgment that what is referred to as politics sometimes amounts to the policing of the citizenry.”

Champagne is the author of five books, the most recent of which, “Italian Masculinity as Queer Melodrama: Caravaggio, Puccini, Contemporary Film,” was published by Palgrave in 2015. He spent the 2006-07 academic year teaching in Tunisia on a Fulbright Fellowship and four summers as a visiting instructor in intercultural communication at John Cabot University in Rome.

A writer and musician from a young age, Champagne produced his first play, “A Touch of Garbage,” during grammar school. “It was based on the story of King Midas, but in this version, everything he touched turned to trash,” he said. “I had an issue with the school’s decision to start using disposable lunch trays.”

As an undergraduate at Hunter College at the beginning of the AIDS pandemic, Champagne played piano at one of the country’s first safer-sex workshops and for a cabaret performer whose act revolved around living with HIV. “My life and career have always been marked by this kind of dual concern: What is art? What is politics? Is there or should there be a relationship between the two?”

“The kinds of questions Dr. Champagne will ask about the intersection of art, artists and political upheaval are profoundly interesting because, like much study in the humanities, there’s no ‘right’ answer,” said Ralph Ford, chancellor of Penn State Behrend. “Dr. Champagne is a dynamic instructor in the classroom, so I have no doubt that his Penn State Laureate presentations will be both thought-provoking and entertaining. I expect that his audiences will leave with more questions than they had when they arrived, but will be richer for the experience.”

An annual faculty honor established in 2008, the Penn State Laureate is a full-time faculty member in the arts or humanities who is assigned half-time for one academic year to bring greater visibility to the arts, humanities and the University, as well as to his or her own work.

The Laureate appears regularly at events throughout Pennsylvania. Other responsibilities include visits to Penn State campuses throughout the commonwealth; WPSU-TV and radio appearances, readings, and features; community outreach; and facilitating opportunities for other faculty and students to engage in the above activities

Champagne succeeds 2017-18 Penn State Laureate Andrew Belser, professor of movement, voice and acting in the College of Arts and Architecture.

The committee was chaired by Kathleen Bieschke, vice provost for faculty affairs, and included David Christiansen, chancellor of Penn State York; Barbara Korner, dean of the College of Arts and Architecture; Board of Trustees member Jay Paterno; Rebecca Strzelec, 2016-17 Penn State Laureate and professor of visual arts at Penn State Altoona; Bonj Szczygiel, associate professor of landscape architecture and women’s studies; and Susan Welch, dean of the College of the Liberal Arts.

Champagne’s presentation will take place at 12:15 on Sept. 27 in the Dawson Building, Room 10.