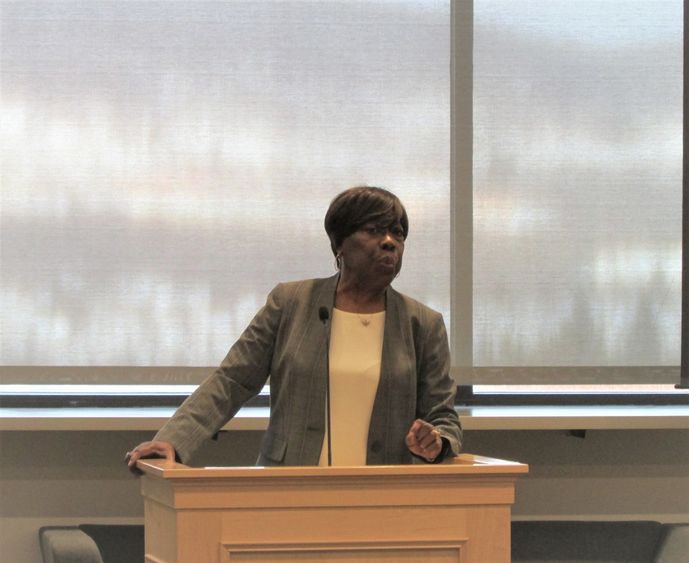 Civil Rights icon and celebrated singer Bettie Mae Fikes was the keynote speaker at Penn State Scranton's MLK Day event on Tuesday, sharing her stories, experience and celebrated voice with those in attendance.

“You don’t have to have a beautiful voice to tell a story,” said Bettie Mae Fikes, also known as “The Voice of Selma," during a presentation Tuesday at Penn State Scranton, before breaking into a solemn and emotional chorus of “Nobody Knows the Trouble I’ve Seen.”

Of course, Fikes does have a beautiful singing voice, and has used that voice as an instrument of change over the course of the past six decades; first in the Civil Rights Movement of the 1960’s, continuing in the ongoing fight for equality for Black people and eventually as a celebrated singer and musician, gracing the stages of Carnegie Hall, the Newport Jazz Festival and the Library of Congress, even performing with the likes of Joe Turner, Lightnin’ Hopkins, Albert King and Bob Dylan.

During her presentation, part of Penn State Scranton's celebration of Martin Luther King Jr. Day, Fikes recounted her history-making activism, interspersing those recollections and stories, with choruses of songs that have inspired her and which reflected the emotions and feelings surrounding those stories.

Born in Selma, Alabama, Fikes became a leader for the Student Non-Violent Coordinating Committee when she was just a teenager, being jailed in 1963 for protesting during the voting rights struggle in Selma.

She emerged as a music leader in the fight for equality as a founding member of the Freedom Singers – traveling with Dr. Martin Luther King Jr. – and eventually becoming a celebrated icon of the Civil Rights Movement.

Of course, in those early days, she said, King was not yet famous or the legend today’s generation knows him to be, and she knew him simply as ‘Uncle Martin’. She was with him and other civil rights leaders, such as the late Senator John Lewis, when they and busloads of other marchers traveled to Selma to fight for the right to vote for Blacks.

And it was a fight. The violence started before they even reached their destination, on a bus ride from Washington, D.C. to Selma. The bus was hijacked in Alabama, the bus driver accosted and people with two-by-four boards locking them in the bus. “And that was just the bus ride. Imagine what was going through (the marchers) minds at that time” she said. “Place yourselves in the seats of these young men and women.”

The violence continued when they would leave the bus and do something as simple as going into a diner for something to eat or drink. Black people who dared to venture inside and sit down had ketchup and mustard thrown at their heads; cigarettes butted out on their bare skin – all the while having to sit there nonviolently. One young man ended up needing 32 stitches after an altercation that arose because he dared to sit at the counter of a diner; a Black man – a husband and father – was shot in his own driveway.

“The rights you take for granted today, someone had to die for and someone had to fight for,” Fikes emphatically stated. “People neglected their own families to help other families.”

Eventually, the marchers in Selma attained one of their main goals and the Voting Rights Act of 1965 was signed into law by President Lyndon B. Johnson, protecting the rights of black citizens to vote.

However, today, violence continues and people remain divided, a facet of history that has occurred throughout the centuries. The fight for true equality is a fight we’re still fighting today, Fikes said. “We’re so divided now. Where are we? We’re not fighting for now, we’re fighting for the next generation.”

To the more than 180 attendees that were tuned in to the event both in-person and remotely via Zoom and Facebook Live stream, Fikes encouraged them to use their right to vote and make it a point to go out and vote in future elections, and encourage others to vote as well. And continue to tell the stories. “I like to sing; I like touching hearts. We’ve got to tell the stories. We’ve got to sing the songs.”

Interested in learning more about or getting involved in organizations aimed at increasing the representation and advancement of people of color? Check out the local, national and international websites below:

“The rights you take for granted today, someone had to die for and someone had to fight for,” Fikes emphatically stated. “People neglected their own families to help other families.”