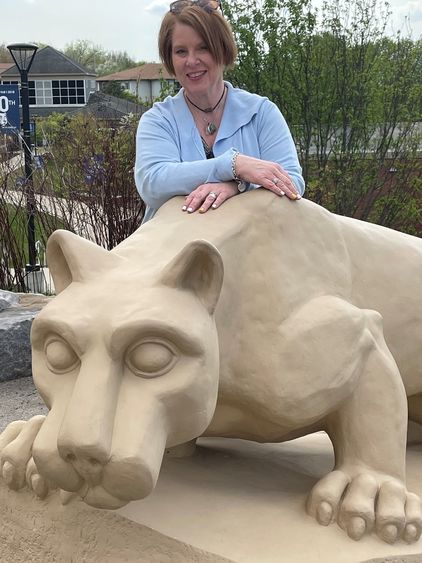 On June 21, 2021, Penn State Scranton alumna Lynn Jesuit-Donnini will be the featured speaker for the Penn State Northeast Region alumni chapters’ first Summer 2021 Virtual Speakers Series event. She will discuss her experiences as the vice president of people/culture and public relations at Scranton-based Pennsylvania Paper & Supply Co., which is associated with the NBC sitcom “The Office.”

DUNMORE, Pa. — Lynn Jesuitt-Donnini loves her job for a number of reasons, among them its relationship to a certain beloved Scranton-set TV show.

On Monday, June 21, the Penn State Scranton alumna will be the featured speaker for the Penn State Northeast Region alumni chapters’ Summer 2021 Virtual Speakers Series. That night, Jesuitt-Donnini will discuss her experiences as the vice president of people/culture and public relations at Scranton-based Pennsylvania Paper & Supply Co., which for more than a decade has nurtured and maintained an association with the NBC sitcom “The Office.”

The Penn Paper-“The Office” connection is now well-known. Not only is the television show set at a Scranton-based paper company — the fictional "Dunder Mifflin" — but the Penn Paper building is among the various Scranton locales seen in the show’s opening credits.

In addition to her duties hiring, training and retaining Penn Paper and its affiliates’ nearly 300 employees, Jesuitt-Donnini has become the business’ go-to authority on “The Office." Even today, the brick building with the distinctive tower continues to attract TV-show fans from all over the world who want to get a glimpse of the iconic landmark and all of the other real-life local places name-checked on the series, which ran on NBC from 2005 to 2013 but remains wildly popular through syndication and streaming services.

At the upcoming event, Jesuitt-Donnini will share her anecdotes and collectibles from "The Office," as well as provide attendees with a virtual tour of the Penn Paper operation.

Jesuitt-Donnini said the company’s enduring association with the show has been nothing short of mind-blowing.

“I never would have thought it would be this popular even 10 years later. We get visitors from all over the world to visit the tower and just get a glimpse of the ‘Office’ sign,” she said. “We are also one of the top five things to do while visiting Scranton, and have been on the cover and listed in many magazines and tourist promotional items. While we are not just a paper company, fans don’t seem to mind. They just want a picture to say they were here. The PR for this has been unbelievable.”

Jesuitt-Donnini attended the campus from 1986 to 1988 before completing her bachelor’s degree in management at Penn State Harrisburg in 1990.

She remembers plenty from her two years on campus, including the many people who left a lasting impression on her, among them former faculty members Dante Cancelli, Richard Harmstone and Walt Weber and former admissions office representative Ann Wilson. Even today, “they remind me how to be a better person,” said Jesuitt-Donnini, who has participated in the campus’ mentoring program.

“I loved being at Worthington,” said Jesuitt-Donnini, referring to the campus’ former name. “Obviously, it was a little different, having only a few buildings compared to what is there today. The professors were just amazing and I often reflect on so many experiences. They really did take an interest, and back then we didn’t have the technology that we do today, so you were really able to sit and verbally communicate for hours with each other. For many of us, the SLC was our second home. There was no texting and no computers in class — you had to go to the computer lab to use one back then.”

After graduating from Harrisburg, Jesuitt-Donnini worked in the banking industry for several years before realizing her true calling was “to work with individuals to help them find career placements and better opportunities.” So, she switched gears and pursued a new career in human resources.

One day in 2005, she received an unexpected phone call from Douglas Fink, owner of Penn Paper & Supply. He wanted her to join the family-owned company as its very first director of human resources.

Since then, Jesuitt-Donnini’s role has expanded significantly to also include public relations, marketing and event planning.

She’s proud of the vital role she’s played in the company’s continual growth.

“I’ve been here for 16 years, so that does say a lot,” Jesuitt-Donnini said. “It took a while and a lot of hard work to obtain this position. You must have a good leader and you also need to have great people on your team. The team is what drives any company and its goals, and here everyone knows what is expected of them.”

Given the campus played such a significant role in shaping her professional journey, Jesuitt-Donnini is all too happy to come back and share her story with her fellow alumni.

“I’m looking forward to sharing my life and how my education, family and Penn State really set the groundwork for who I am and what I bring to others,” she said. “No one can ever take your education from you. It is something that today many may take for granted, but just 30 years ago, that was not the case. The world has changed, the people have changed, technology has played a huge part in lives, but the one thing that still remains are the values that have to be there. Having a good foundation, education and family values plays a big part in anyone’s future.”

The presentation begins at 6 p.m. on Zoom. Register at this link for it or any of the other summer alumni events.

The other Northeast Region Virtual Speakers Series events this summer are:

Corina Piller, Penn State class of 2016, owner of She Paints Co., will demonstrate the process of making soy candles.

Retired Penn State Hazleton Assistant Professor of Biology David Orbin and his wife, Kathy, will discuss the origins of guide dogs for visually impaired people, their training from birth to service, and how local volunteer families are participating in this important service.

Roseanne Chesakis, Penn State class of 1984, information resources and services supervisor at Penn State Schuylkill’s Ciletti Memorial Library, will host a night of Penn State-themed trivia. There will be five games in total, with each winner receiving a $20 Barnes & Noble gift card. One grand prize winner will receive a Penn State goodie basket.