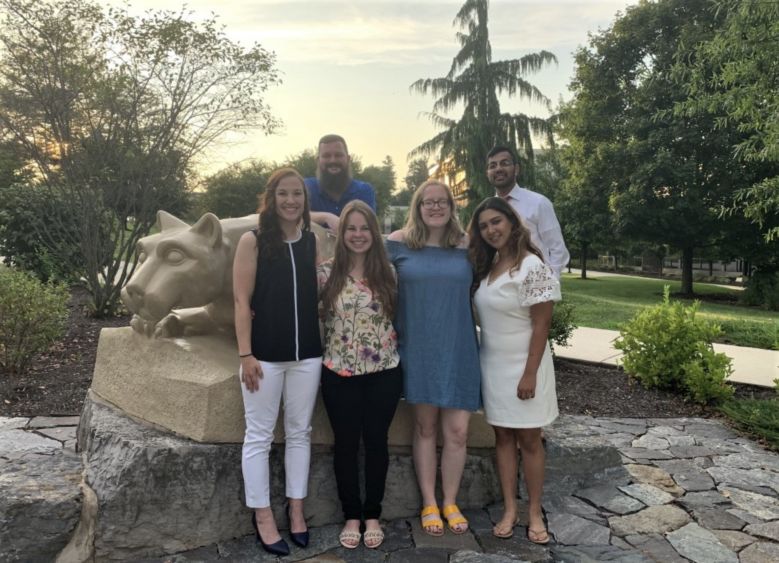 The leaders of Penn State Scranton’s Student Government Association (SGA) are committing themselves to maximum visibility and engagement for the 2019-20 academic year.

As always, this year’s officers are focused on serving as the representative voice of the campus student body. But, SGA President Emily Scarfo noted, the group is putting even more of a premium on outreach in hopes of giving as many students as possible a say in campus affairs.

“I want to improve the students’ voice, and advocate for them. I don’t think we did enough of that last year,” said Scarfo, a sophomore nursing student who previously served as SGA vice president.

Among its numerous responsibilities, the group conducts official meetings every Monday; maintains at least five office hours a week; plans a number of events and fundraisers throughout the year; helps oversee the campus Student Facilities and Student Activity fees; advises the campus Senate; and meets monthly with Chancellor Marwan Wafa.

Of late, SGA has enhanced its social media presence, and is making significant use of the Corq app and Penn State Scranton Engage website to promote events. The group has already coordinated several successful events this semester, including the Party in the Parking Lot tailgate-style event and the GPA Celebration. And, it’s continuing its strong allegiance with THON via regular fundraisers.

Penn State Scranton Assistant Director of Student Affairs and SGA staff adviser Matt Nied pointed out several recent ways in which the group has helped improve campus life, from successfully lobbying for longer hours of operation in The View Café to providing funding for construction projects like the patio renovation and the new Information Sciences and Technology (IST) Active Learning and Innovation Lab.

Now, he said, the impetus is on reaching a larger portion of the student body. Many students, he said, simply lack awareness of SGA’s core mission.

“Over the past couple years, a lot of new academic spaces have been created for our students,” Nied said. “What SGA wants to do is get out to those spaces and meet the students where they are, to find out what their needs are and find ways they can improve things for them.”

“When I asked the officers what their goals were for the group, one of the common themes was getting out and meeting the students personally,” Scarfo added. “The goal is finding out how we can enhance their college experience in any way we can.”

As an adult learner, York is making a concerted effort to reach out to that specific demographic, which historically has not been hugely involved in student governance.

“When I first got here, I figured I wasn’t going to get involved in any way other than academically. Eventually, though, I wanted to get more involved,” York said. “From my dealings with adult students, most of them don’t engage in campus life in any big way and don’t really know what’s going on on campus. They don’t check their email, or use the app. But I want to get them more involved, so they have an outlet. We have all these funds at our disposal, so they should have the benefit of having a say in how they’re used.”

Polanco, meanwhile, has brought her skills as a corporate communication student to her role as public relations director. She recently created an SGA Instagram account, and has been busy making eye-catching event flyers to distribute around campus.

Still, she particularly enjoys the one-on-one interactions with students.

“I think we’ve been doing a good job of connecting more with the students on a personal level,” Polanco said. “When I’m at events, I like to ask them questions. It’s almost like I’m conducting a survey of them without them realizing it.”

Patel has taken it upon himself to closely engage with the campus Senate.

“I want to go to Senate meetings and find out what’s going on with students’ majors, and find out how I can help them improve their major,” he said.

As SGA chief justice, Bronson helps conduct meetings. Beyond that, she’s made it a priority to engage with the campus clubs in hopes of getting them more involved in governance.

“I’d like to get the clubs more involved in our events, because I think a lot of students don’t even know they’re out there,” Bronson said.

On the flip side, it’s just as important for SGA to support club events, according to York.

“Even if we’re not hosting the event, we try our best to have a representative there,” he said.

Outside of her duties as chief of staff, Boyd, a talented photographer, will offer students the chance to get professional headshots taken for their LinkedIn accounts and other job-related documents. And, she’s working with campus Career Services Coordinator Jon Tobin to help students refine their resumes and cover letters.

Given all of these initiatives, serving as an SGA officer is a significant time commitment on top of all the other responsibilities the students have academically and in their personal lives.

“The goals we have require a lot of hours,” Scarfo said. “Sometimes, I feel like I’m stretched too thin. But, I love the job.”

“Our brains are constantly functioning and trying to come up with new ideas. It’s all I think about other than school,” Polanco added.

That said, the officers stressed that there’s plenty of time for fun and bonding within the group. That camaraderie, along with the genuine sense of purpose that comes with serving in SGA, make it a truly worthwhile endeavor.

“We really are one big family. And that’s really cool,” Scarfo said. “We’re all Penn State, and we’re all working for the same thing.”