Graduate Testimonials - In their own words.....

"I chose Penn State Scranton because I wanted to be a member of a prestigious and hardworking community. It offered a vast amount of options where one could either transfer to University Park or stay here. I also liked the small class size and the scenic view of the Lackawanna Valley.

My experience in the IST program was very gratifying. The courses are set out to allow one to "test-drive" a particular set of skills they possess and interact with other students with similar interests and skills. The knowledge and experience that I gained from the IST program has benefited me tremendously in my career. It has allowed me to gain valuable knowledge and certain skill sets that I use every day.

One of the many things you gain from the IST program is the ability to work with groups of people who have different views and skill sets. The projects that you complete allow you to learn new things. During my four years at Penn State Scranton, I have learned valuable skills and had fun as well. The professors are not only teachers, but are on many occasions your biggest fans. The IST program is a very close knit community in that you will always be connected even after you graduate." 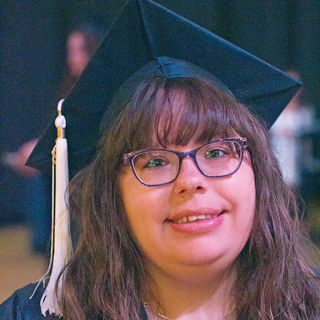 I always wanted to go Penn State, so I am so excited to be graduating from here! I graduated high school in 2007 and didn’t start right away, but it’s what I always wanted to do. I think starting later helped me focus more on my studies. I originally thought I might go for biology, but I had one class with Fred Aebli and he’s why I chose this major. He made it so interesting and fun.

The IST program was a great experience for me - it gave me exposure to new, relevant, and exciting areas of study while reinforcing those I was already familiar with. I was taught by energetic and passionate teachers, in subjects that were interesting to me.

The values of the IST program encouraged me to learn more, both inside and outside the classroom. Encouraging extracurricular and in-classroom learning was an important part of my growth, and I am very grateful I had the opportunity to learn what I did from the staff at PSUWS, both in the IST program and out.

What I learned at Penn State is used daily in my job. Public accounting is driven by technology, and the group I am in implements ERP packages, develops one-off custom solutions, and delivers support for enterprise-scale tax software. The exposure I received in virtually every one of my classes helps me perform my job, whether it be standing up a server, interfacing with third-party APIs, or just writing functional specs. These are skills that were either developed or reinforced at Penn State Scranton."

"I chose Penn State Scranton because it offered the same, if not better, hands-on education with smaller class sizes than at a larger campus. Attending a university at a campus close to home was the most cost-effective option for me and my parents.

As an IST student I was challenged consistently, which may be one of the reasons why my work ethic is very strong. I was introduced to various programming languages, database systems and languages, and scripting languages like HTML, XML, and JavaScript.

If I were to offer anyone in the program advice, it would be to stick with it. Don't be frightened or doubt yourself. No one can learn everything overnight and it isn't easy, but you will retain the knowledge from the wonderful instructors at the Scranton Campus.

Dr. Deb, Fred, and all of the well-educated staff are there to make sure you get the best education possible. They are readily available, often after hours and through electronic communication, and gave me the best advice to get me on the right track to personalize the education I wanted and needed.

One of my toughest classes involved Object Oriented Programming. I made OOP my enemy and I ended up taking more web programming and systems integration classes. It wasn't until I worked with OOP on a daily basis that I realized that I actually understood and retained more knowledge than I gave myself credit for.

My education allowed me to work on various physical media formats. I entered the workforce as a DVD Authoring Technician doing low level logical scripting. Soon I made the move to HD-DVD Authoring Engineer, which was a combination of XML scripting and JavaScript.

Now, ironically enough, I am a Team Lead/Blu-ray Engineer. My responsibilities include managing a small team and programming Blu-ray discs using JAVA, the very same Object Oriented Programming language that terrified me in college. I have my education at Penn State Scranton to build a foundation of knowledge that has allowed my career to progress as it has."

"Penn State Scranton was the only college where the professors have a passion for their curriculum and were able to channel it into current marketable skills. I could start here and go anywhere. It was like being in an innovation factory where you could use your imagination, teamwork and skills and accomplish and produce anything.

I provided the passion and the professors provided the knowledge about technology and business and how to apply them both. It taught me to never be afraid of the changing tide of technology because I can change with them."

"I chose Penn State Scranton because I knew a Penn State degree was highly regarded by employers but I wanted to stay local. I was specifically attracted to the IST program and since it was offered locally it was the perfect fit for me.

A career in IT is not something I always dreamed of. Up until this point I had worked in mostly administrative positions. I came into the IST program with very little technical skills and did not even own my own computer when I first started. But I was attracted to the seeming blend of business and IT aspects in addition to the career tracks (and starting salary!) discussed as possible opportunities upon graduation.

The Penn State Scranton experience was one I'll never forget. I loved the individual attention I was able to receive from instructors as a result of small class sizes. The IST program had several adult students enrolled which was a great opportunity to work in teams with individuals already employed in the industry; it enabled me to learn to appreciate and understand diverse perspectives. I recall long hours and late nights spent in the computer lab working on individual and team assignments. Today I still keep in touch with some of my instructors and many of the friends I made while attending Penn State Scranton.

I attribute much of my career success to the instructors who both taught me and provided guidance along the way. The focus on projects, collaboration, and team dynamics prepared me for working in an Enterprise wide IT organization where not only my coworkers but also my customers are geographically dispersed.

The program covered a broad spectrum of technical areas which equipped me with the technical foundation to begin a career in IT. Since technology is ever changing, continuous learning and development are essential in this field. And since business needs are the drivers for new and innovative technologies, it is the individual with a strong combination of both technical and professional skills (such as effective communication, time management, team participation, and task leadership) whom corporations seek.

The IST program at Penn State Scranton equipped me with both. I began my IT career at Lockheed Martin in 2002 and completed their Information Systems Leadership Development Program and received a Masters Degree in Management Information Systems in 2004. Today I support SAP software and hold 2 SAP Certifications. I continue to seek learning and training opportunities and thus continue to reach higher levels within the organization."