SCRANTON, Pa. — Usually, noontime programs held in the View Café at Penn State Scranton are fun and entertaining, even if there is a learning component involved. But on Wednesday, the presentation was of a more serious nature. 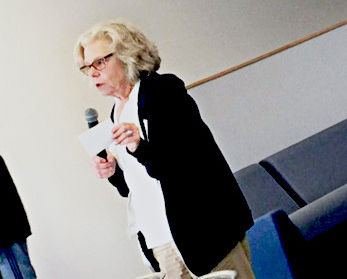 Copeland provided handouts and resource pamphlets for the campus to provide to students and faculty. One of those handouts included the “Power and Control Wheel” chart, which gave examples of "non-violent" and "violent" behavior that one would need to be aware of if they find themselves in an abusive situation.

She shared some disturbing local statistics about domestic violence:  on one single day -- September 13, 2017 -- WRC assisted 42 adults and 25 children; while 43 people called their abuse hotline; and two individuals went to a safehouse.

Copeland blames the lack of funding for resources for this lack of care. But that is not the only reason some victims don’t get the help they need.

Many times, victims are not fully supported or believed by law enforcement after abuse takes place, she explained; and oftentimes courts end up failing to protect victims, so the abuse continues.

Joanne Smith, a domestic abuse survivor, was emotional as she talked about the years of abuse she endured by her then-husband.

“The person who is angry at you for setting boundaries is the one with the problem,” she said. “I found myself looking around to see what was out of order — what was I going to get yelled at for — I was constantly being criticized. Abuse happens in private.”

Eventually, Smith searched her heart, considered her relationship with her daughter, and realized she did not want to raise her daughter this way.

She sought assistance from the Women’s Resource Center in Montrose, in Susquehanna County, a small community north of Scranton, just outside of Binghamton, New York. (WRC services both Lackawanna and Susquehanna counties.)

After utilizing their services, she broke free from the life she had been living.

“I survived. I kept my house. Now, how am I going to support my daughter?” she said.

Her biggest recommendation: “Get your own credit.”

This recommendation comes with the underlying issue that a victim needs to be able to support themselves once they are on their own and free from abuse.

Now, a professional gardener with a successful greenhouse business, she announced, “I am the Plant Lady! I am happy, I am thriving, my business is thriving, my kids are all raised. I don’t have to walk on eggshells.”

Another piece of advice:  “Journal everything and every one of your thoughts.” Smith did that, but then burned them to leave it behind her, she said.

Copeland stressed the need for more community involvement from entities like Penn State Scranton’s HDFS Community Club, which can bring a focus to these issues so that community members in need, who are victims of domestic violence and abuse, have access to local resources and know how to access them.

Dr. Melissa A. LaBuda, assistant teaching professor in HDFS at Penn State Scranton, was in attendance with HDFS majors and HDFS Community Club members. She brought up the correlation between health issues in adults and childhood abuse and neglect.

Copeland cited the ACE Study, an acronym for Adverse Childhood Experiences, a collaboration of the CDC and Kaiser-Permanente in which 17,000 people participated between 1995 and 1997.

The study found a strong graded relationship between exposure to abuse or household dysfunction during childhood and multiple risk factors for several of the leading causes of death in adults, such as depressive disorders, obesity and addiction.

At the end of the presentation, Copeland stressed the importance of prevention and helping to shape policy in addressing domestic violence and abuse.

Events such as the one put on by the HDFS Community Club help bring awareness of these issues to the campus community and promote greater involvement and action.

If you are or know a victim of domestic violence and would like to obtain more information about the Women’s Resource Center, visit http://wrcnepa.org/ or contact the WRC directly: