Students recognized for their efforts over the past year 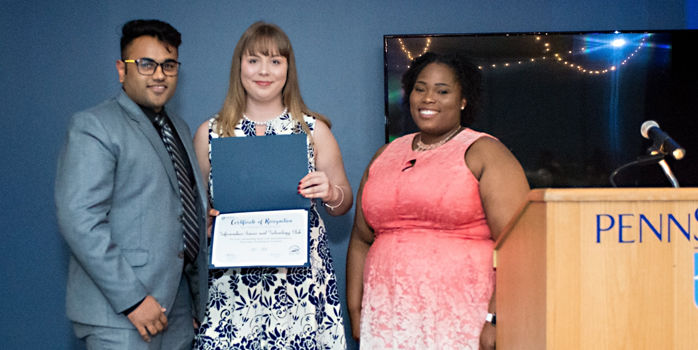 The Information Sciences and Technology Club was one of the campus clubs recognized at Penn State Scranton's annual Student Recognition dinner, an annual event that honors students for their accomplishments throughout the year. Accepting the award is Jinal Patel, far left, from presenters Student Government Association (SGA) Vice President Liz Brandt and SGA President Ashli Daley.

Over 125 students, staff and faculty attended this year’s ceremony, which was turned into a full-fledged celebration for students, with music and dancing following the formal dinner and handing out of awards.

As the former SGA leaders stepped down from their positions and new officers were sworn in, it was an emotional time for the students and the staff who have mentored and worked with them over the past year, as their terms have ended and several will graduate and begin their journey outside of the campus.

As Rocio “Ro” Saavedra was sworn into office as SGA president that evening, she reminded everyone why the evening was so special.

“We, as student leaders, work hard all year to serve our school and local community," said Saavedra. "The annual recognition is the one time we are recognized for our hard work. It's the one night every year where we all come together to celebrate the amazing year we've had.”

The following awards were given at the Student Recognition Dinner:

Sandra Feather, director of enrollment management, and Sabrina Gray, Lion Ambassador president, presented recognition awards to the outgoing Lion Ambassadors who were transitioning to University Park or graduating. The honored Lion Ambassadors are as follows:

One area in which the campus excelled this year was in fundraising for THON. Nied and Gilpatrick presented and honored the THON chair members and dedicated dancers.

“This year our campus came together and raised over $28,000," said Nied. "This is the most our campus has raised ever! We would like to honor and thank our chairs Rawan Abu-Zaineh and Kelly Arnold for all their hard work and dedication to THON this year.

“We would also like to recognize our two THON dancers Ashley Shuttleworth and James Walker who danced for 46 straight hours. It takes such strength and determination to complete this challenge. Congratulations!”

Unsung Hero Awards were presented to:

Rising Star Awards were  presented to:

“This year, we would like to recognize all our clubs and organizations for their hard work and dedication to community service,” Daley announced. “Our clubs this year volunteered with SGA’s Peanut Butter and Jelly Sandwiches project, which donated sandwiches made by students to the St. Francis of Assisi Soup Kitchen, and with the United Way’s Adopt a Food pantry, as well as assisted THON in reaching a record-breaking goal.”

Ashli Daley presented awards to a staff and a faculty member for excellent service to students.

Meg Hatch received this year’s Excellent Service to Students Faculty Award. Hatch is an associate professor of biology and co-coordinator of the science program.

In her nomination, a student wrote: “Dr. Hatch went above and beyond with helping me and other students in the Science program to achieve their goals. It is very clear that she is dedicated to students here at Penn State, and is always looking to improve their education. Many times, she has stopped me and asked me how I am doing and how other students are doing within the biology program because she genuinely cares about the progress of students. She is more than worthy of this award.”

A student nominator wrote, “Matt has been the driving force behind me being a very involved student within our campus community, keeping me involved in organizations such as Student Government, THON, and New Student Orientation. The support that Matt has shown me during my time at Penn State has challenged me as a person to become a strong-willed and confident individual that will be a valuable addition to society."

"For the very first time, Matt took about 14 students to Beaumont, Texas to assist residents and organizations who were affected by Hurricane Harvey last year," added the nominator. "He has embodied each aspect of the campus' strategic goals, especially creating a welcoming campus, as he maintains an open-door policy, and makes himself available for any and every student, and increasing student engagement, by pushing students to their fullest potential.”

“Senators: This year, the Student Senate took on a new role of advocating for students," said Daley. "These students served as the liaison between the student population and the student government executive board. As senators, these students hosted monthly meetings with their program coordinators, as well as the students within their major.”

“This year, we have two senators who have dedicated three years of service to the Student Government at Penn State Worthington Scranton," added Daley. "I would like to recognize these senators: Michelle Lavender and Mathew Acevedo: Thank you for your three years of dedication.”

“Without these next individuals, SGA would not have been as successful as it was this year,” Daley continued. “The first adviser that I would like to recognize is one whose office I continuously pop into to give him a hard time. This award goes to our co-adviser Brad Kovaleski.

“The second individual that I would like to recognize has lifted the spirits of each and every individual that passes through her office. She has been a source of inspiration for all, and for that we couldn’t be any more grateful. Thank you, Julie Gilpatrick."

The final award of the evening went to Nied.

“Finally, our 'Den Dad,'" Daley said. "From taking us all over Pennsylvania for leadership conferences, to taking us to Texas for spring break, this individual has been a source of encouragement to a lot of students here at Penn State. Matt Nied, thank you for all of your support especially this year, and thank you for bringing out the ‘kidult’ in all of us.”

Daley ended her remarks with some wisdom she gained during her years at Penn State Scranton, and praise for her fellow SGA executive board members.

“When I began my journey as president, my quote for the year was to ‘leave a little sparkle wherever you go,’ and I know without a doubt that the tireless meetings, projects, planning and dedication that each and every single one of these girls, and our advisers, endured allowed us to leave our sparkle at Penn State Worthington Scranton. We sincerely thank every single club leader, senator and student who have made our year such a successful one, and we wish the best of luck to the incoming executive board,” she said.

“My advice to all the incoming club leaders is ‘Success is the result of perfection, hard work, learning from failure, loyalty and persistence,’ so when you feel as though nothing is going right, keep going and leave your sparkles.”

To see and get copies of photos from the event, go to Penn State Scranton's Flickr album:  https://www.flickr.com/photos/pennstateworthingtonscranton/albums/72157671133404428.