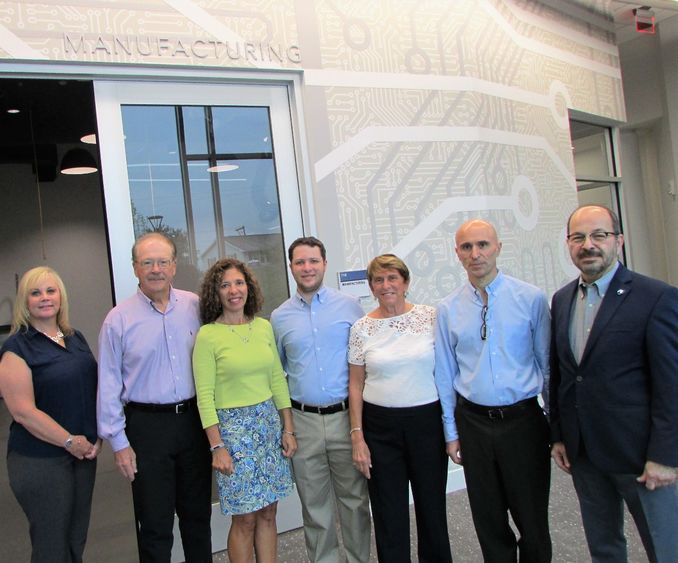 DUNMORE, Pa. – Nicholas Scandale showed his dedication to Penn State Scranton in many ways, from his longtime service on the campus Advisory Board to his various philanthropic endeavors.

Scandale died in 2015, but his commitment to the campus will live on for generations to come thanks to his wife, Diane, who recently made a gift to have the Engineering Building’s mechanical lab named in her husband’s memory.

The gift is among several naming opportunities the campus has offered for the Engineering Building, which officially opens this fall as the home of the new four-year Mechanical Engineering program. It will also house the Police and Public Safety office and the Center for Business Development and Community Outreach (CBDCO).

"We are extremely grateful to Diane and her family for this very generous gift to our campus,” said Penn State Scranton Chancellor Marwan Wafa. “Thanks to the commitment of donors like the Scandales, Penn State Scranton will be able to flourish financially and continue its mission for many years to come.”

The naming of the Engineering Building’s mechanical lab is highly appropriate, given Scandale’s background. After earning his engineering degree from University Park in 1951, he went on to start his own very successful engineering and construction business, Scandale and Associates.

The gift is yet another example of the Scandales’ financial commitment to the campus. Years ago, the couple established the Nicholas and Diane Scandale Scholarship, which is awarded to full-time students who are enrolled in an engineering degree program who have achieved superior academic records and have a proven financial need.

An avid sports fan, Nick Scandale also contributed to the campus’ Matt McGloin Baseball Field, and he was a Penn State football season ticket holder for more than 50 years.

“Nick loved Penn State. He started a Penn State football club with many of his friends. Many of them didn’t even graduate from Penn State, but they loved the school because Nick loved it. He was a great man,” Diane Scandale said.

Following Nick’s death six years ago, Diane Scandale and the rest of the family – children Susan Winkler and Greg Scandale, 1986, and grandchildren Robert and Julia Winkler -- struggled to think of an appropriate way to honor his memory. That was until a lunch meeting Diane had with Chancellor Marwan Wafa and Ostroski, who mentioned how naming opportunities were another great way to contribute to the campus’ mission.

“That remained in my memory, and it made sense to me that it could be something that we as a family could commit to,” Diane Scandale said. “Then, when I heard about the new Engineering Building, and Nick having been a civil engineer, the lightbulb went off in my head, and I decided that was exactly the right commitment for our family.”

“The building is beautiful, and I think the architect did a marvelous job and the transformation from the existing building is amazing. We love it,” she continued. “Penn State always has been known as a great engineering university, so having a mechanical engineering program in our backyard is so important to our students and I think it will help to keep them in this area to work and prosper. Nick would feel the same. Our family is extremely happy to have any part in helping this program achieve success.”

This gift advance "A Greater Penn State for 21st Century Excellence," a focused campaign that seeks to elevate Penn State’s position as a leading public university in a world defined by rapid change and global connections. With the support of alumni and friends, “A Greater Penn State” seeks to fulfill the three key imperatives of a 21st-century public university: keeping the doors to higher education open to hardworking students regardless of financial well-being; creating transformative experiences that go beyond the classroom; and impacting the world by serving communities and fueling discovery, innovation and entrepreneurship. To learn more about “A Greater Penn State for 21st Century Excellence,” visit greaterpennstate.psu.edu.