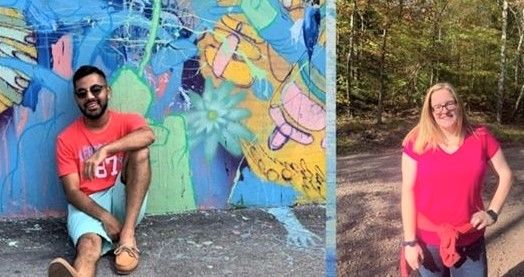 Harshil Patel, left, and Marissa Boyd, chose a more casual look for the photos they used when sending out campaign messages to the Penn State Scranton student body in their successful run for SGA president and vice president.

DUNMORE, Pa. — With the spring semester officially over, it is now time for many in our campus community to start looking ahead to the 2020-2021 academic year — and that includes students.

One group of students who were thinking a year ahead even as the spring semester was in full swing, were those involved with the Student Government Association, particularly the newly elected officers who will lead the SGA over the next year.

However, this year would prove to be like no other, not just for the SGA and the officer hopefuls — it would be different for everyone due to the COVID-19 coronavirus pandemic that forced Penn State to move all of its classes, events and programs to a remote environment.

For the first time in the campus’ history, elections for the SGA officers had to be done remotely, with campaigning and voting taking place online. With two sets of teams running for president and vice president, it was Harshil Patel and Marissa Boyd, respectively, who won the election.

Incoming SGA President Harshil Patel said that running for office virtually was a little difficult, since you don’t get to personally talk to the students to listen to their needs and engage with them. However, he feels it was a challenge he had to overcome during this trying time.

He also said that the election had a great turnout overall, as almost 240 students voted. Both Patel and Boyd won by 132 votes.

“My three main goals/plans for the upcoming year as president are: first, community outreach to get Penn State Scranton’s name out and provide community services; second, to make Penn State Scranton a more diverse/inclusive campus. Lastly, I want to be the voice of the student body and everyone’s voice should be heard,” Patel said.

Incoming SGA Vice President Marissa Boyd said that running the election virtually was a challenge, because when students are on campus, you can see someone and talk to them one-on-one.

"When we moved to remote learning, it was hard to reach out to students so we could discuss what we want to work on for next year. I think we would have had more students voting if we were still on campus, but I also think we did a great job promoting ourselves and reaching out to people, so that definitely helped,” Boyd said.  “It was a challenge to try and find people who weren’t in our friend groups to tell them our initiatives.”

Boyd says her first goal as vice president is to connect the senators to the Alumni Association, so that students will receive more information about what they can do with their major and what different careers they can have. Another goal she has is to increase involvement by one-on-one conversations or reaching out to clubs and faculty to discuss the events.

“I would like to see students get excited about our campus again, we have a wonderful campus with welcoming faculty and staff. I would like to help any student that needs it,” Boyd said.

“One new initiative that I would like to see talked about is the possibility of a greenhouse on campus. I think this will help with research with the biology students. I want to encourage students to get involved on campus. This will make your college experience fun and engaging. This was my first year fully engaged on campus and it was the best one yet!” said Boyd.

A new initiative that Patel and Boyd said they have for this year is to increase involvement and community outreach; create more collaborations with clubs, organizations, alumni and faculty; and to advocate for every student.

“The last thing I want to add is to let every student know that we are here for them. Our office is open to everyone. Anything they need help with, we’ll try our best to help each and every one,” Patel said.

This year, the group also organized some new initiatives, such as  working with Campus Nurse Jill Thoman to set up pop-up food pantry tables in every building; athlete recognition day; GPA celebrations in both fall and spring semesters; expanding the SGA by adding a Senate Leads position for the next academic year; creating an SGA Instagram; a ribbon cutting for the revamped equipment room in the Multipurpose Building; assisting with the Patio Ribbon Cutting; and hosting “My Penn State Story”, a series of events that allow students, faculty, and staff to share their stories and why they love Penn State Scranton.

A look back and some advice for the new officers

Emily Scarfo, the outgoing SGA president, said the most enjoyable aspect of being part of SGA is the relationships you build with everyone.

“I had the opportunity to build relationships with people from just about every department on campus, and even some people who were from other campuses. My entire executive board was new to me too. I didn’t really know everyone on my executive board super well and we came from all different walks of life; I probably wouldn’t run into them if it weren’t for SGA. Because of SGA, I now have five great friends,” she said.

"We got so much done this year as an SGA and none of that would have happened if this team settled to be just a good team,” she explained. “They all wanted to be the best for their position and their delegates and that is what made this year so great.”

Scarfo said that the most challenging thing about being SGA President is the time commitment.

“I knew that going into the fall semester that it would be hard, and I had to manage my time well, but I was still shocked by the time commitment this position takes,” Scarfo explained. “Like the rest of my team, I demanded the best out of myself for this position. This is a very tiring and sometimes stressful position, but it is so worth it!

Scarfo advised the new group of officers to build a network among the Commonwealth Campuses, and raise their voices in all matters of the Council of Commonwealth Student Governments.

“Be vocal, meet your students where they’re at, don’t be afraid to ask for help and demand the best out of yourselves and each other for your positions," Scarfo said.