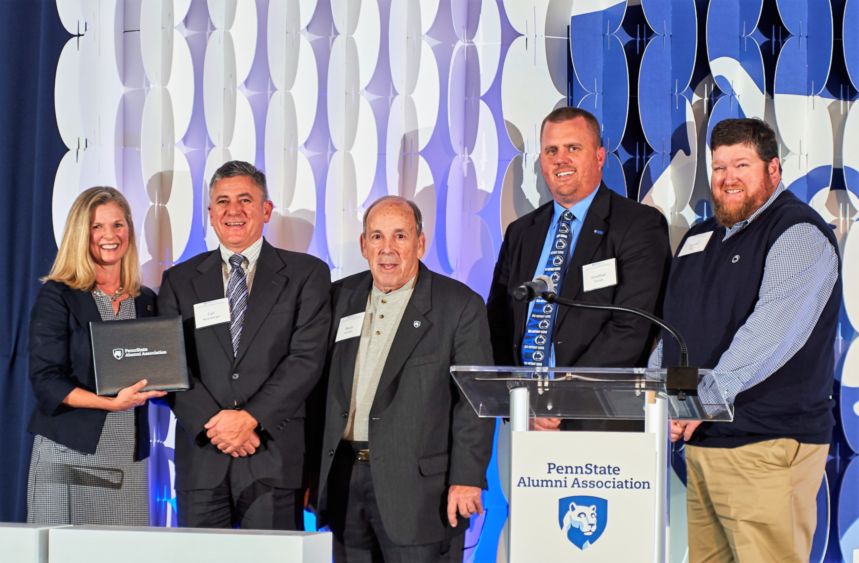 “With nearly 300 Penn State Alumni Association organizations across the U.S., it is quite an honor for our local alumni to be recognized for their accomplishments,” said Deborah Brandt Johnson, Penn State Scranton alumni and stewardship coordinator. “As a campus, we have always known how fortunate we are to have such loyal and talented alumni representing our region. These University-wide awards are the perfect showcase for their hard work, creativity and support, and are extremely well deserved.”

The Joint Activity Award is presented to two or more groups that have worked collaboratively on a program or event that strives to reach a broader and more diverse audience.

Specifically, the Scranton Alumni Society collaborated with the Wilkes-Barre, Schuylkill and Hazleton alumni organizations on the “A Night of Penn State Jazz” concert, which was held Tuesday, Oct. 15, at downtown Scranton’s historic Ritz Theater.

Among other highlights, the concert featured a performance by Penn State’s Centre Dimensions jazz ensemble and the newly formed vocal ensemble, both conducted by Marko Marcinko, director of Penn State School of Music’s Jazz Studies program. It was the third in a series of jazz concerts organized by the groups, following shows at Wilkes-Barre's F.M. Kirby Center for the Performing Arts and Hazleton’s Wiltsie Center.

It was Penn State Scranton Alumni Society President Dave Lucas’ first time attending the Alumni Council dinner, and he was honored to be among the award recipients from the regional alumni groups.

“Knowing that we all worked together for the ‘Night of Jazz’ made it even more commendable,” he said. “The Alumni Association’s recognition emphasizes that our collaborative efforts were successful. The society is an entirely volunteer effort, and it is great to know that our small group makes an impact among the 70,000-plus members of the Penn State Alumni Association.”

Overall, the dinner was a “spectacular” experience, Lucas said.

“I’m already looking forward to 2020,” he said. “I was in awe of all the people who dedicate their time and talents to the University. I can’t decide on my favorite highlight of the evening, as it was a night filled with so much that embodies why we give back ‘For the Glory’ of Penn State.”

The scholarship, part of a 2:1 match from the University via a recently concluded program, will be offered to undergraduate students enrolled at Penn State Scranton who are participating in RaiseMe, the Pathway to Success: Summer Start (PaSSS) program, or Complete Penn State. First preference will be given to students participating in PaSSS, per guidelines set by the Alumni Association.

“It’s an honor to be recognized by the Alumni Association for all the hard work our chapter does and all the money we raise at our annual dinner,” said Penn State Scranton Director of Athletics Jeff Mallas, president of the Greater Scranton Chapter. “A big reason why we’re able to be successful is, of course, our members, but also the people of northeast Pennsylvania who come to the dinner and give us support year in and year out.”

“It just makes you feel really good to be raising money for students so they can get a Penn State education,” Mallas added. “To give those opportunities to other people, people who might not otherwise be able to go to college, that’s why we do it. And we don’t take that for granted.”

Each year, the Alumni Association gives out awards to affiliate groups in 10 different categories. Award nominations are due in early March, with winners selected by the Awards Committee of the Alumni Council. Each of the winning groups receives a $500 program grant to be used for future initiatives.