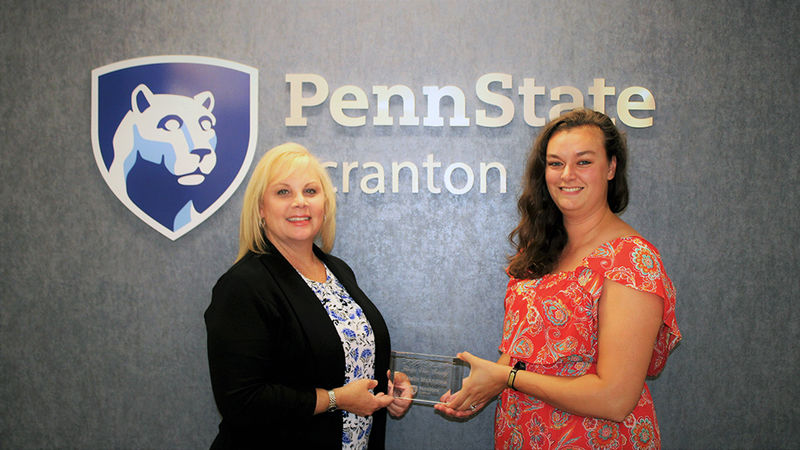 Katelin McAndrew Mentz recently made a $10,000 pledge to support two campus awards at Penn State Scranton that honor the legacy of her mother, the late Linda McAndrew, R.N., a beloved member of the campus’ faculty for over 20 years. When she passed away in 2017 at the age of 60, McAndrew left behind a legacy of caring and involvement that is still remembered at the campus to this day.

Katelin McAndrew Mentz recently made a $10,000 pledge to support two campus awards at Penn State Scranton that honor the legacy of her mother, the late Linda McAndrew, R.N., a beloved member of the campus’ nursing faculty for over 20 years. When she passed away in 2017 at the age of 60, McAndrew left behind a legacy of caring and involvement that is still remembered at the campus to this day.

“We are so thankful to Katelin, who is not only honoring her late mother, but also creating her own legacy of caring and concern for Penn State Scranton students,” said Penn State Scranton Chancellor Marwan Wafa. “Linda was such a respected and admired member of our community and Katelin’s gift will pay tribute to her in such a meaningful and life-changing way.”

During her time at the campus, McAndrew not only taught nursing classes, but also mentored nursing students in their required clinicals at local hospitals; worked with students and fellow nursing faculty members on research projects; and even organized a disaster training drill on campus for nursing students.

She was also a regular supporter of THON – and made the trip to University Park’s Bryce Jordan Center most years to lend both emotional and physical support to the campus students taking part in the annual 46-hour dance marathon that raises funds for pediatric cancer research and support.

In 2018, nursing graduates donated a bench in McAndrew’s honor that now sits outside of the main entrance to the campus’ Nursing Suite, and two awards were created at the campus to provide financial help to students pursuing a nursing degree:  The Lady with the Lamp: Linda McAndrew Memorial Gift of Scholarship and The Knowing Nightingale. The names of both gifts reflect the work of Florence Nightingale (1820-1910), a social reformer, statistician and nursing manager during the Crimean War, considered by historians to be the founder of modern nursing.

Through her new commitment to the funds, Mentz has made campus history by becoming the youngest member of its prestigious donor group, The Penn State Scranton Ridge View Society. She is a 2015 Penn State alumna who earned two degrees, a B.S. in secondary education and teaching and a B.A. in political science and government at the University Park campus.

Even as a young donor and a newlywed, Mentz said, “It was essential that I do this for both scholarships to honor my mother’s deep commitment to nursing and her service as a faculty member, as well as her efforts for THON.” McAndrew’s involvement with THON had a very personal meaning. As a young child, she was diagnosed with a rare form of liver cancer that miraculously went dormant, but then resurfaced decades later, and eventually claimed her life.

Personally, Mentz wants to make sure that she and her husband, Justin, are using their resources, which include an inheritance from Linda, to do something positive and impactful that benefits others. It is also her goal to carry forward Linda’s ideologies and beliefs in giving back.

“You do have to think about your own personal financial goals, but you can still use your money to do something better, something that will benefit the greater good,” said Mentz. “My mom always wanted to make sure people felt included and cared for. She believed so fiercely not only in service –we volunteered every holiday when I was growing up -- but also in education, so deciding to make this gift was a no-brainer.”

According to McAndrew, it’s not the age of a person or how much they have to give that is important. “Young people need to realize, even for those just starting out in their careers who don’t have a lot of money, is that you don’t necessarily have to do something big to make a difference in someone’s life.”

“I think it is a wonderful tribute to Linda that Kate wanted to help the nursing students at our campus,” said campus Director of Development Christine Ostroski. “Kate is truly setting an example for other young people with her philanthropy by establishing these scholarships.”

“When you end up inheriting money from someone, it doesn’t matter when that is, or how old you are at the time,” McAndrew said. “You could be in high school, or you could be graduating from college and get a gift from your parents or family or friends,  you don’t need to have thousands of dollars to make an impact on your community. Someone with just an extra $100 could donate that money to a worthy cause and make a difference in their community and positively impact others.”

She recalled one particular year in college when she needed to take a few summer courses, and she received a $250 gift to help with the cost. “Decisions you make throughout your life can have such an impact,” she stressed. “That summer, that $250 that someone donated helped me immensely at that particular time.”

“I hope my gift empowers people to realize that you can take what you have now and choose to do something impactful,” she added, recalling two of her mother’s favorite sayings -- “Leave it better than you found it” and “Integrity is doing the right thing, even when no one is watching.”

In addition to the two gifts she recently made to Penn State Scranton, Mentz hopes to have an ongoing impact by her actions in her everyday life as well.

“As a teacher, I hope to positively impact children by what I do and be a positive role model for them. We are our own futures, and we need to see ourselves as our own philanthropy and make sure we’re engaging as best we can. As Penn Staters, we stand up and say, ‘WE ARE,’ but it’s essential to realize that we are also standing up for the future and future generations. “We also need to look toward the generation that is going to come after us [and] I want to make sure that I’m helping them be the best that they can be.”

With the record-breaking success of “A Greater Penn State for 21st Century Excellence,” which raised $2.2 billion from 2016 to 2022, philanthropy is helping to sustain the University’s tradition of education, research and service to communities across the Commonwealth and around the globe. Scholarships enable our institution to open doors and welcome students from every background, support for transformative experiences allows our students and faculty to fulfill their vast potential for leadership, and gifts toward discovery and excellence help us to serve and impact the world we share. To learn more about the impact of giving and the continuing need for support, please visit raise.psu.edu.